for assignment 3 they suggest we try working with tyvek. I tried one experiment a couple of weeks ago, based on a tutorial I saw on December 2014’s workshop on the web issue. it said to iron the tyvek then paint it with acrylics afterwards. well, I tried it and didn’t like how the painted version turned out. at all. I really liked the plain, white ironed tyvek – the shapes are amazing. very organic. like pebbles in a stream, or cells in the body. I like the ridges on the reverse side also. but I must have painted too thickly with the acrylic paint so I think I ruined them. then last night Hanna posted her watercolour painted versions on the textiles facebook page and they looked amazing. she’d made them look so fluid. she said she painted with really watery watercolour, then used a heat gun to shape the tyvek. so I tried again last night using watercolour, ink, charcoal, brusho, coloured pencils, pastels – this time painting them first, then ironing to get the shapes. much better! I like these attempts much better than the initial ones. Barbara mentioned you can use silk dyes too (setasilk) and stitch them before heating too. that makes more sense as the tyvek I have is soft like paper originally but once heated becomes like hard plastic, so I’m not sure how stitching it afterwards would work. Hannah mentioned there are also different types of tyvek. I’d just ordered a sampler kit so I’m not sure what gauge mine is, but it sounds thicker than what she’s using. 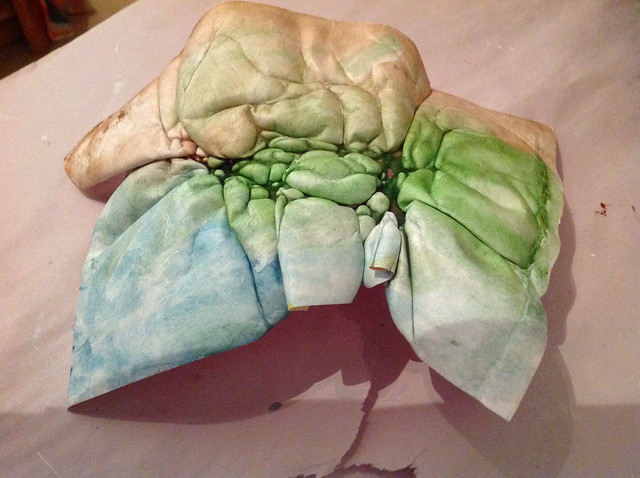 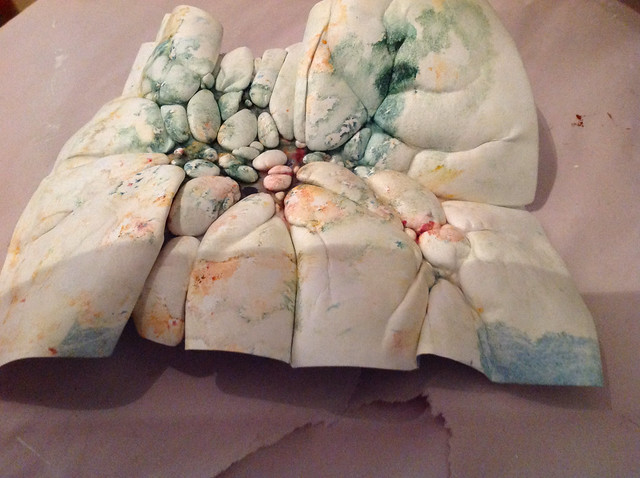 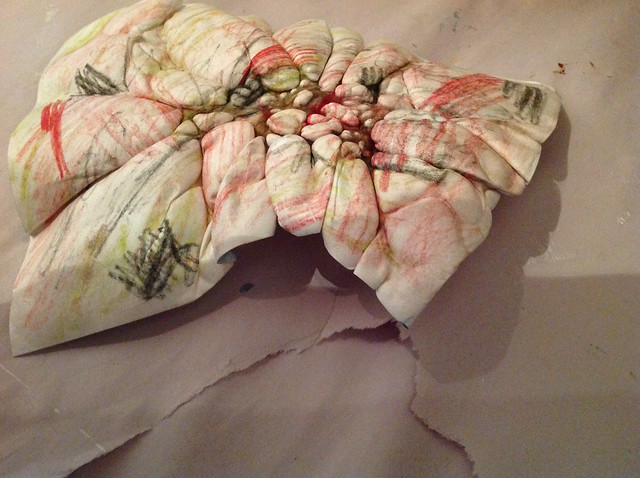 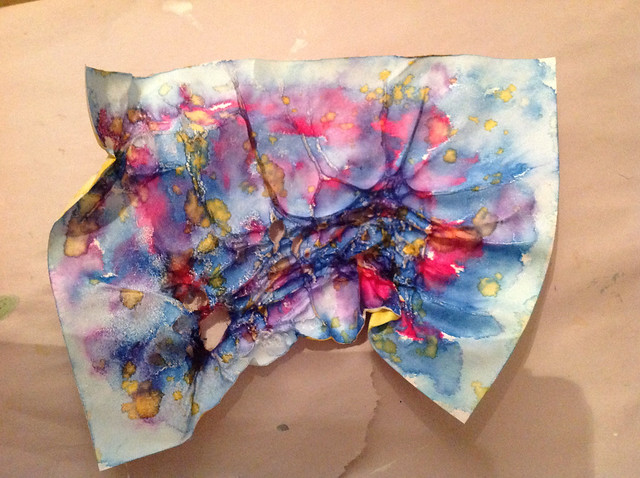 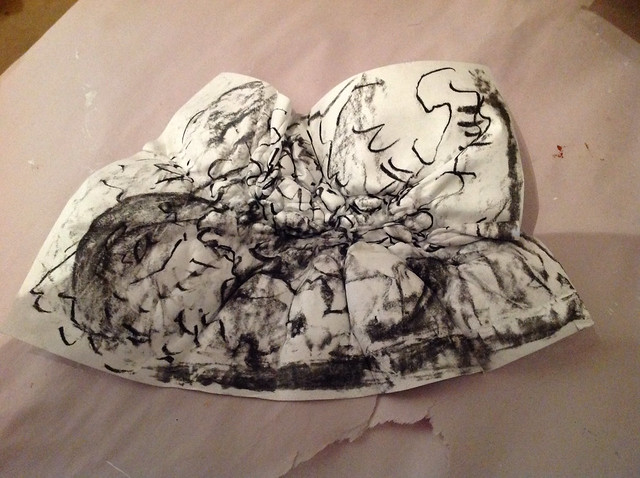 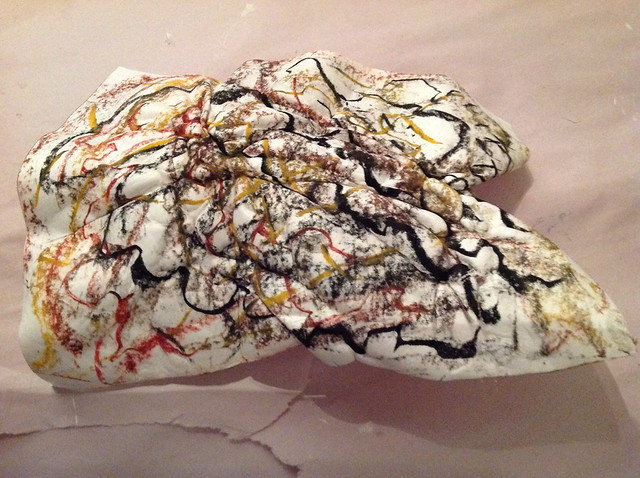 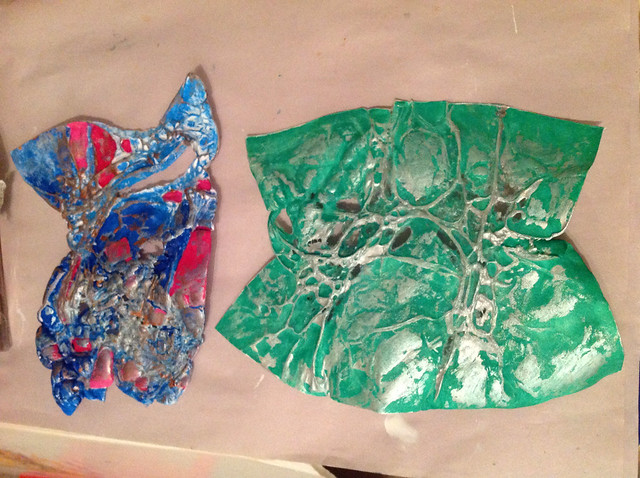 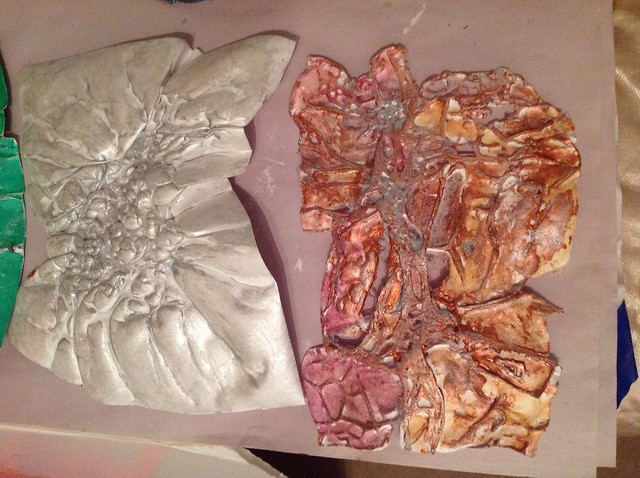 making some geometric fabric folds on cotton since my copy of “Shadowfolds” book by Jeffrey Rutzky and Chris K Palmer arrived. this one is called “Fujimoto’s twists” — it’s a mixture of stitched squares, triangles and lines, and is a bit like smocking. I need to iron the front side flatter, but happy with how it turned out. I’d drawn the pattern shapes freehand instead of tracing the pattern as the book suggested, so the shapes are slightly uneven compared to the examples in the book, but I’m OK with that. makes it a bit more organic.

they don’t take too long to make either — I made this sample over a couple of hours whilst watching tv.

I’m trying techniques for the fabric manipulation part of assignment 3 and came across this note called gorgeous fabric manipulation (velvet) so I tried it. I only used very small fabric samples to make initial tests, and I should have used a heavier weight fusing/interfacing as the velvet is heavier fabric than the light fusing I tried. apparently this works well for silk too

Use a cooling rack that has both horizontal and vertical grids. place velvet upside down and with a pencil push little bunches of fabric through. Take a fusible interfacing and then place on top of tufted velvet (wrong side) and iron. The grid should have little feet on sides so that the velvet is not crushed.

at first I couldn’t understand what she meant by using the pencil — I thought she meant to put holes in the velvet, so I only tried this on a very small piece, in case it didn’t work out. which it didn’t. but I did like the grid indentations in the velvet, so the experiment wasn’t all lost. I was going to try a metal collander also but the holes were too small for the velvet — perhaps silk would be better for this as it’s lighter fabric, though it would also be a hard surface to iron.

I didn’t have a metal rack with squares/vertical and horizontal grids, only horizontal rows, so I had to hold two racks together to form the squares. next time I might try buy another rack. or use small pegs/bulldog clips to hold the velvet through the holes, as it was hard to get it to stay in them. I had to iron it first to try hold the velvet into shape, and then iron the fusing over it to seal / hold it permanently.

I also tried a small metal egg cup, though it was harder to iron due to the irregular (non-flat) shape